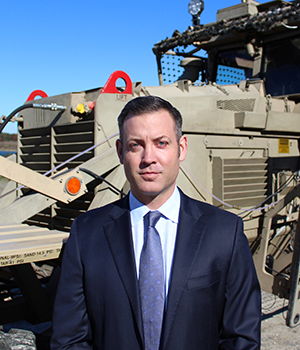 Agility, versatility, and creativity are the three pillars which act as the foundation upon which Patrick T. Callahan, CEO, Critical Solutions International (CSI), www.C-S-I.com, empowers his team to operate and ensure problem solving to meet the extremely demanding needs of their customers. After serving as a U.S. Army Infantry Officer from 2002-2011, Patrick applied tactics he had learned in combat and training and began his private sector career with QinetiQ North America (QNA) in global business development. While at QNA, Patrick was awarded patents for rocket propelled grenade (RPG) net armor and blast mitigating seat solutions and directed QNA to over $800M in sales. When the opportunity presented, he took on a new senior role as Vice President of Business Development for CSI in Charleston, South Carolina. His leadership responsibilities quickly increased, and he was named Chief Executive Officer in 2014. Patrick served as a Visiting Instructor at the Citadel, the Military College of South Carolina, and serves on the Board of Directors for CSI, BlackBox Biometrics, and Red Triangle. Patrick holds a Bachelor of Arts from Cornell University and a Master of Business Administration (MBA) in Entrepreneurship and International Business from the Babson College Franklin W. Olin Graduate School of Business.

CSI is the global leader in delivering advanced route clearance capabilities, providing blast protected vehicles, training and embedded support to the world’s most advanced militaries. This uniquely challenging business has to address the ever-changing battlefield threat of Improvised Explosive Devices (IED’s) and mines by delivering solutions that allow route clearance in a contested environment, saving lives and shortening conflicts as a result of CSI’s capabilities. CSI’s signature product, the Husky, is known as the most survivable vehicle on earth. Through 7,500 IED and mine events, the Husky has never lost a warfighter due to blast.The company provides complete tailored technology packages that are developed through cooperative engagement with stakeholders, to ensure effectively resourced, fielded and sustained solutions.

According to Patrick, the problem sets faced by CSI’s customer base of global stability forces are amplified by the rapid proliferation, low cost and increasingly effective application of the modern IED by terrorist organizations. Unlike more conventional weapon systems, the potency of the IED threat is not built around the effectiveness of a specific design, rather the absence of design. Each device can have different construction, employment, and effect. The IED is constantly evolving with minimal investment, can be applied against new targets, in new environments, and with new impact on the stability of operations, making an effective response to that threat incredibly difficult to isolate. Military forces facing this dynamic threat each have specific conditions that CSI must consider in order to offer completely effective solutions. Tailoring solution sets requires CSI to fully understand a customer’s environment and resources, how their enemy is applying threats currently, and how that threat might evolve once an initial solution is deployed.

As a former combat-deployed Army infantry officer, Patrick’s efforts are driven by an awareness of the end user and an understanding that delivery of a product is only the first phase of a solution’s lifespan and CSI’s obligation to the warfighter. Following an operational customer’s recent deployment of CSI-provided Husky vehicles and Ground Penetrating Radar into a high-risk combat environment, CSI’s customer-facing support and expertise turned what could have been a fatal, disastrous combat engagement into a major advancement of customer effectiveness and confidence in their ability to execute the route clearance mission. Upon experiencing a major IED strike that would have been catastrophic to any other vehicle on the battlefield, the design and capabilities of the Husky vehicle allowed both operators to survive the blast. The customer leadership realized that they needed CSI’s support to recover from the strike and prepare for an evolving battlefield threat. Recognizing the critical impact to the customer’s mission, Patrick Callahan, CSI leadership and field service representatives immediately left the United States and flew into the combat environment to be best positioned to rapidly respond to the new battlefield challenge. Within one day, the CSI team had utilized the Husky’s frangible design to teach the customer how to rapidly reconstruct the vehicle after a major blast, without maintenance facilities, and immediately put it back into combat operations. This response, executed at CSI’s cost, put what would have been a completely destroyed vehicle back on the road within 24 hours, taught the operators of the Husky effective IED strike response, and gave the surviving crew supreme confidence in the vehicle platform, ultimately enabling them to focus on future operational tasks instead of constantly anticipating the potential for the next enemy strike.

CSI leverages best in class commercial off the shelf (COTS) technologies through its strategic partnerships to offer the most effective route clearance solutions to any given customer. This has enabled customers to gain the benefit of enduring research and development for top-quality products in a wide range of technology fields and apply them together using CSI’s expertise and experience against a dynamic threat. It also enables the solutions to incrementally evolve by applying and modifying current technologies with the latest advancements to keep pace with the evolution of the threat.

CSI stays at the forefront of the IED fight by continuously identifying, investing in, and developing emerging technologies and then integrating them into their operationally proven portfolio. Moving forward, the company plans to continue their expansion and diversification of the product catalog and integration of technological advances with relevant combat experience gained by working closely with a global set of customers

To expand upon his experience delivering survivability solutions to allied militaries around the globe, on January 1, 2020, Patrick is expected to assume the role of CEO of a newly formed Survivability company. Critical Solutions International is expected to merge with AirBoss Defense of Landover, Maryland, a global leader in Chemical, Biological, Radiological and Nuclear protective equipment. Following closing of the merger, the new entity will be named AirBoss Defense Group and has a value proposition of bringing a broader portfolio of Survivability solutions to the warfighter.

CSI is a clearance-focused firm that leverages the unparalleled survivability of the Husky payload delivery platform and C-IED operational context of existing Husky customers.