The May 2018 article from platformonomics.com asserts that in order to determine a company's commitment to their cloud platform it’s sufficient to compare CAPEX investment into data center infrastructure. Similarly, James Hamilton, in his blog here, continues this comparison by first estimating the number of regions required to support the world’s IT requirements as a goal for “successful international cloud service providers”. His assertion that “the number of world-wide cloud data centers will far exceed O(10^5) and these will be medium to large data centers”, while used to counter Mark Hurd’s claim that faster servers and databases allows Oracle to invest less, gives insight into his strategy and that “the only way to achieve excellent world-wide cloud services is to deploy at massive scale.” Interestingly this regional domination approach ignores other comparative dimensions such as winning the trust of key customers, penetrating highly restricted verticals, or launching distinctive functionality.

The above chart and both article's logic are similar to the well known comparison of a nations military expenditures as a percentage of GDP (copied from here). Remarkably, James' argument that in order to be a world class cloud provider, a company must invest enough to blanket the earth with more than 10,000 medium to large data centers, echoes the theory of economic militarism, which describes the use of military expenditure to increase the perception of national security. (From Models of military expenditure and growth: a critical revue). 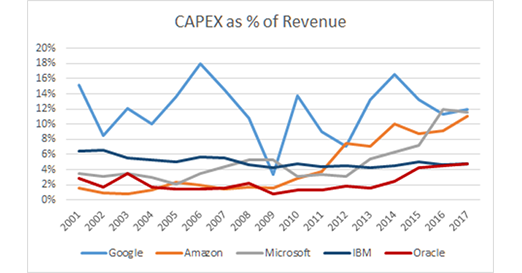 When faced with this argument, it is tempting to assume the best plan is to double down on infrastructure investment and to simply create more regions quicker. International relations provides numerous ways to interpret such an assertion, if we imagine cloud providers to be comparable to nation states. Observers would begin comparing the conflict with a Land Grab or the Sooners behaviour during the Oklahoma land rush of 1889, assuming that a data center’s opening equates to positional strength. The eventual result of such growth would mimic the balance of power theory where neo-realists believe that states seek to preserve their own survival through maintaining or increasing their power. States can also work together to prevent emerging hegemony from either taking power or increasing its control. Contemporary examples of cloud providers acting in accordance with the balance of power theory include the consolidation of competition illustrated in the evolution of Gartner’s IaaS magic quadrant, large acquisitions such as of Red Hat by IBM, and VMware's attempts to stay relevant beyond the data center through partnerships with AWS, Azure, and GCP.

Analyzing the current cloud situation shows that AWS combines James’ AWS coverage strategy and developer friendly service integration. Azure maintains their emphasis on consistent performance, similar experience and increasing the integration between their products. This leads to my assumption that, having secured their initial foothold in the market, the current leaders will continue to develop and secure their competitive advantages rather than expand into unfamiliar territory. 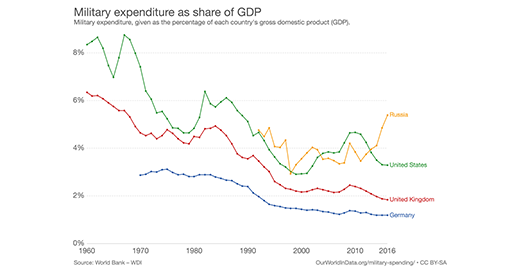 A cloud platform provider, entering into this competition, can decide to mimic the current leader’s strategies and enter into a CAPEX arms race. Balance of power theory would predict that the existing providers would either join together to prevent any competitive advantage or to quickly move to eliminate such a threat. However, a different strategy for entering into this conflict might be based on Mao Zedong’s strategy during the Second Sino-Japanese War. Mao realized that “while Japan is a small country ... China is a big country ... there is the contrast between a small country, retrogression and meager support and a big country, progress and abundant support. It follows from the contrast between strength and weakness that Japan can ride roughshod over China for a certain time and to a certain extent, that China must unavoidably travel a hard stretch of road, and that the War of Resistance will be a protracted war and not a war of quick decision....” (from “On protracted War”).

In order to achieve this, the Maoist theory divides resistance warfare into three phases (as described by Samuel Griffith in his introduction to Mao’s On Guerrilla Warfare). Phase I is the organizing phase, where “volunteers are trained and indoctrinated, and from here, agitators and propagandists set forth, individually or in groups of two or three, to ‘persuade’ and ‘convince’ the inhabitants of the surrounding countryside and to enlist their support.” Phase II, the “progressive expansion” phase, sees “Acts of sabotage and terrorism multiply; …The primary purpose of these operations is to procure arms, ammunition, and other essential material….” And then Phase III, “It is during this period that a significant percentage of the active guerrilla force completes its transformation into an orthodox establishment capable of engaging the enemy in conventional battle.”

To draw an analogy with the current cloud platform environment, a smaller, emerging competitor would first need to establish a strong base of sympathizers, leveraging existing relationships and core users to trial the cloud technology. These early adopters would be like Mao's volunteers and show value and differentiation compared with competing technologies. This would enable the smaller competitor to adopting Fabian tactics to avoid decisive battles that could potentially permanently damage the emerging brand while building on the strength of the core users.

In the second phase, the new competitor would work on expanding its market share through developing long-term relationships with existing customers that convert to public references as well as emphasizing key winning scenarios or competitive advantages that slowly establish critical market share. In the third phase, the conflict transitions into a conventional competition, based on well-known product differentiators, such as AWS’s self-service and tight service integration, Azure’s supporting of the entire digital experience, or Oracle’s comprehensive product portfolio spanning from cloud infrastructure to cloud-delivered core business applications.

Clausewitz wrote in On War, “Wars in every period have independent forms and independent conditions, and, therefore, every period must have its independent theory of war.” And, of course, the above analogy isn't perfect, although it provides a different lens for insight into the still evolving conflict between cloud platform providers. This conflict clearly does not compare with a protracted war involving one side desperately fighting with little means. Rather, the guerrilla warfare analogy provides a different approach for competition rather than assuming success will only result from winning the CAPEX arms race. Most technology commentaries have declared the war to be over, by focusing on AWS' first mover advantage. The popular press conveniently ignores when the AWS executives comment that the change initiated by cloud transformation has just begun. For example, Andy Jassy, in a University of Washington CSE Distinguished Lecture, "there won’t be just one successful player. There won’t be 30 because scale really matters here in regards to cost structure, as well as the breadth of services, but there are going to be multiple successful players, and who those are I think is still to be written. But I would expect several of the older guard players to have businesses here as they have large installed enterprise customer bases and a large sales force and things of that sort.” Indeed, tomorrow's battlefields have not been defined and the real competition has not yet begun.